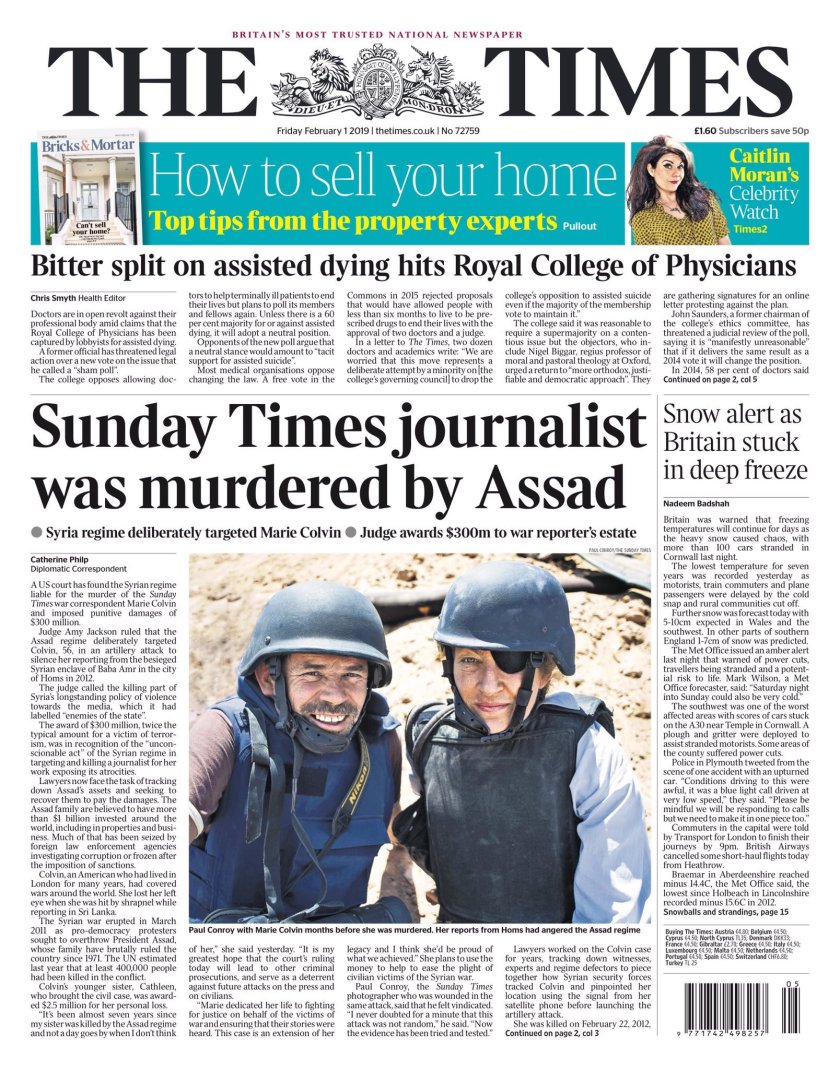 Originally published on Notes Toward an International Libertarian Eco-Socialism

On Thursday, January 31, a U.S. judge found the Syrian regime of Bashar al-Assad responsible for the targeted assassination of U.S. journalist Marie Colvin in Homs in 2012. A reporter for The Sunday Times, Colvin had been covering the regime’s besiegement of the Baba Amr district of Homs, whose population had rebelled against Assad’s rule as part of the Revolution which had begun in the southern city of Der’aa in March 2011. Though evacuated with other internationals and journalists within days of her arrival as a precautionary measure in light of a threatened regime offensive, Colvin returned with the French photojournalist Rémi Ochlik and British photographer Paul Conroy to the improvised community media center from where they had been reporting. As Conroy describes, he, Colvin, and Ochlik believed that, by reporting on the regime’s besiegement of Baba Amr, they could affect world opinion and bring relief to civilians under fire.  It was from Baba Amr that Colvin courageously went live on CNN, the BBC, ITN News, and Channel 4 News, on February 21, 2012, to belie the Assad regime’s fabrications that its assault on the district was exclusively targeting so-called “terrorists.” It was for this reason that the regime killed her, the very next morning after the broadcast. They triangulated her location via her cell signal due to Colvin’s bravery in broadcasting the devastating truth to the world, murdering her and Ochlik in a targeted artillery strike. As judge Amy Jackson observes in her ruling, Colvin was “specifically targeted because of her profession, for the purpose of silencing those reporting on the growing opposition movement in the country.”

Colvin’s remarkable story is told in two recent films: Under the Wire and A Private War. I will not here be discussing Under the Wire, which is brilliantly reviewed by Muhammad Idrees Ahmad in the New York Review of Books here. Instead, I will offer some comments about A Private War, a 2018 dramatization of Colvin’s life, directed by Matthew Heineman and written by Marie Brenner and Arash Amel.

Though Colvin covered armed conflicts for three decades, in A Private War, we follow her in her later assignments to war zones in Sri Lanka, Afghanistan, Iraq, and Libya. It is amidst covering Sri Lanka’s civil war that Colvin suffers a disfiguring injury, leading her to wear a distinctive eye-patch over her left orbit. While there is little sense in the film that Colvin had an anti-imperialist critique of U.S. participation in wars in Afghanistan, Iraq, and Libya, the film depicts her dynamic and increasingly humanist approach to journalism, culminating in her martyrdom in Homs in February 2012. During the Libya segment, which takes place shortly after the outbreak of protests against Mua’mmar al-Qaddafi, we see Colvin outright interviewing the autocrat. Though Colvin never had the chance to question Assad—she was no Vanessa Beeley, a neo-fascist propagandist, but rather the Syrian despot’s direct victim—we get the sense that the writers and director are here channeling Assad’s specter through Colvin’s interaction with Qaddafi, given their similarities, from political authoritarianism to inter-personal repulsiveness and sexism, and their common opportunistic use of nationalist, ‘socialist,’ and ‘anti-imperialist’ rhetoric to legitimize their crimes. It follows logically that both Qaddafi and Assad would present essentially all opposition to their rule as “al-Qaeda” and/or “terrorists,” as they have.

END_OF_DOCUMENT_TOKEN_TO_BE_REPLACED

The danger of nuclear war is present today more than ever with Trump’s threats against North Korea and Iran. Without precedent in US history, the president openly states that he is willing to wage war and destroy a nation for US interests, disregarding his allies’ wishes. Trump not only follows the advice of his buddy Benjamin Netanyahu about the Iran nuclear deal, but he also announces that Jerusalem is the capital of Israel. He remains ahead of schedule on the opening of the US embassy there as well as cutting off funding for Mahmoud Abbas for a Palestinian state, unless he bows to Israel and respects Trump. At same time, his military commander General Jim Mattis announces that the US should be ready for war at any moment.

END_OF_DOCUMENT_TOKEN_TO_BE_REPLACED

The Coalition for Peace, Revolution, and Social Justice (CPRSJ) aims to resist capitalism, imperialism, and authoritarianism in the Trump era. We are helping to develop a thoughtful, multidimensional, and proactive opposition to the intensifying authoritarianism that has become evident around the globe, as exemplified by Donald Trump in the U.S., Vladimir Putin in Russia, and Xi Jinping in China. We oppose NATO and U.S. imperialism because they underpin capitalist-militarist hegemony around the globe. In general, we target rampant class oppression, imperialism, racism, sexism, heterosexism, nativism, Islamophobia, anti-Semitism, ableism, and environmental destruction.

Domestically, we resist Trump’s absurd and deranged proposals to build a vast border wall with Mexico, deport millions of people, broaden the prison-industrial complex and police powers in the name of law and order, cut tens of millions off from healthcare access, further deregulate the economy, suppress climate science, and greatly expand U.S. military and nuclear capabilities. We note that Trump is in sync with neofascist movements in Europe, especially in France, Austria, the UK, and Hungary.

In contrast to liberals who oppose Trump on the basis of the neoliberal politics of Clinton and Obama, we believe that the problems facing us lie in the very structure of contemporary capitalism.

In contrast to the authoritarian left, we oppose and organize against the machinations not only of U.S. imperialism and its subimperialist allies like Israel and Saudi Arabia, but also those of Russian imperialism and of subimperialist powers like Iran.  Thus, we oppose the Israeli occupation of Palestine, Saudi Arabia’s barbarous war on the people of Yemen, and the untold brutality of Assad’s suppression of the Syrian Revolution, which has been abetted by Russia, Iran, Hezbollah, and other Shi’a militias.

In the U.S., we support issues and movements like Black Lives Matter, women’s rights, free abortion on demand, climate and environmental justice, a living wage, the rights of immigrant labor, justice for Latinx, struggles of Indigenous peoples for autonomy and liberation, healthcare for all, and full rights for transgender people.

Our class politics recognizes the fundamental importance of an affirmative, liberatory, and humanist alternative to capitalism and the unity of all working people across national borders on the basis of international solidarity.

We invite other organizations and individuals who share these views to join this coalition.

Initial conveners include the following socialist and anarchist organizations:

Alliance of Syrian and Iranian Socialists