On Sunday, January 6th, 2019, around 80 people gathered at the Westside Peace Center to attend a panel discussion entitled “Eco-Socialism or Extinction: Can We Overcome the Existential Threat of Capitalism?” Organized by the Coalition for Peace, Revolution, and Social Justice (CPRSJ), co-sponsored by Extinction Rebellion Los Angeles and Sunrise Movement Los Angeles, and endorsed by System Change Not Climate Change-Los Angeles (SCNCC-LA), the event brought together a panel comprised of eco-socialists and climate-justice organizers, followed by a lively group discussion with participants.

First, moderator Javier Sethness, Black Rose/Rosa Negra Anarchist Federation (personal capacity), introduced the panel and its speakers. Reviewing recent “climate alarms” and the August 2018 “Trajectories of the Earth System in the Anthropocene” paper, which describes the risks the “Earth system” faces due to biosphere degradation and the violation of environmental boundaries, beyond which feedback loops would render global warming a self-perpetuating phenomenon, resulting in the grim reality of “Hothouse Earth.” Identifying the primary obstacle to the realization of a global eco-socialist transition away from the path of climate breakdown as being capitalist hegemony and concentrated State power, whether in the hands of Donald Trump, Vladimir Putin, Xi Jinping, Mohammed bin Salman, or Jair Bolsonaro, he recommended a radical strategy characterized by managed decline, ecological restoration, “natural” geo-engineering, and green syndicalism.

Next, Mariah Brennan Clegg, from the Bonfire Anarchist Collective and UC Santa Barbara Campus Marxist-Humanists, spoke in favor of eco-decentralization, following from their analysis that ecological devastation results from hierarchy, and that participatory solutions can help build popular community resilience. Clegg emphasized the dysfunctionality of centralized economic systems, resulting in the dyads of ‘sacrifice zones’ (such as the “cancer villages” of Louisiana or China) and ‘sanctuary zones’ (Beverly Hills, malls, gated communities). Instead, they argued in favor of the unification of bio-regions (or biological regions) with “techno-regions,” by which they mean spaces in which the trans-human dimension is integrated into production and social institutions designed for use-value in place of profit and self-management in place of domination.

Sydney Ghazarian, from the Democratic Socialists of America-Los Angeles Climate Justice Committee and DSA Ecosocialist Working Group, dedicated her comments to thinking through many of the implications of the October 2018 Intergovernmental Panel on Climate Change (IPCC) report for leftist organizing: that is, given that it warns us clearly that mass-extinction is a very real near-term possibility, due to the hegemony of capitalism. She emphasized firstly that the findings of this report must inspire a strong sense of urgency on the part of the radical left, considering that we have at most 11 years to prevent catastrophic climate breakdown. Ghazarian added that the World Wildlife Foundation (WWF) estimates that, 1-2 years before the deadline for the Aichi Targets on biodiversity (2010), “average wildlife population sizes could decline by two-thirds from their 1970 levels.” Secondly, that left organizing strategy under these conditions should take advantage of the multiple emerging crises to bring about a wide-ranging eco-socialist regeneration of society. Ghazarian calls this the “people’s shock doctrine,” and it echoes Andreas Malm’s recommendations on eco-socialist strategy, based on an observation and analysis of the Russian and Syrian Revolutions. Rooted in a vision of an interconnected, multi-level plan to project people power against hegemonic capitalist power, Ghazarian’s proposal would unite the climate movement and the left to transform the economic and political spheres into a zero-emissions society that would restore devastated ecosystems and human communities. Citing a letter published in Nature in 2017 which concludes that we have approximately a 5% chance that global warming will be limited to 2°C, she underscored that ecological revolution might be humanity’s last chance.

END_OF_DOCUMENT_TOKEN_TO_BE_REPLACED

The Los Angeles Coalition for Peace, Revolution & Social Justice invites you to a panel discussion:

Eco-Socialism or Extinction: Can We Overcome the Existential Threat of Capitalism?

“Before the spark reaches the dynamite, the lighted fuse must be cut.” – Walter Benjamin

From the devastating wildfires that have raged recently in California—coming unusually late in the calendar year, likely due to ongoing drought conditions—to the melting of the polar ice caps and the death by overheating of coral reefs—the “rainforests of the oceans”—it is clear that we confront an ecological crisis of vast proportions. It is equally clear that the global dominant class has no solution to these problems of capital-induced global warming and mass-extinction. While Donald Trump, Vladimir Putin, Mohammed bin Salman, and Jair Bolsonaro shamelessly seek to facilitate the maximum extraction of profit from the working classes and an imperiled Earth, even so-called “progressive Democrats” have no strategy to mitigate climate change. We forget how much Trump’s catastrophic climate-denialism follows from Barack Obama’s ecocidal legacy. Indeed, several new studies have stressed the likely terminal near-term consequences of climate breakdown: in its October 2018 report, the Intergovernmental Panel on Climate Change (IPCC) concludes that we have at most 12 years to prevent catastrophic climate breakdown, whereas, in late November, the United Nations reported that the world must triple its efforts to prevent global warming from becoming a self-perpetuating phenomenon.

Amidst the significant obstacles that the environmental crisis poses to human welfare and the integrity of ecosystems, we ask whether we can wield the alternative vision of eco-socialism in time to stave off the destruction of humanity and the biosphere—and, if so, how?

Please join us for this important panel discussion with a number of thoughtful eco-socialists. 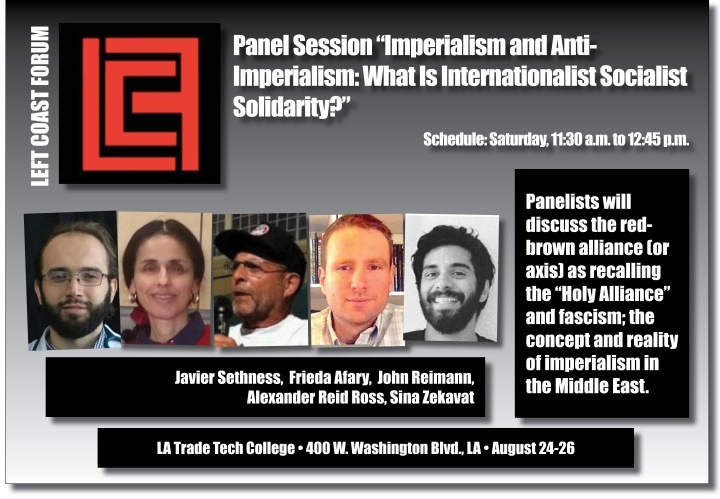 Please find below video recordings of four of the speakers from the first panel hosted by the Coalition for Peace, Revolution, and Social Justice (CPRSJ), at Left Coast Forum at the Los Angeles Trade Tech College (LATTC) on Saturday, August 25th. The panel was entitled “Imperialism and Anti-Imperialism: What Is Internationalist Socialist Solidarity?”

Unfortunately, we do not have a recording of Sina’s comments, or of the second panel we hosted that day, “A New Kind of Anti-War Coalition.”