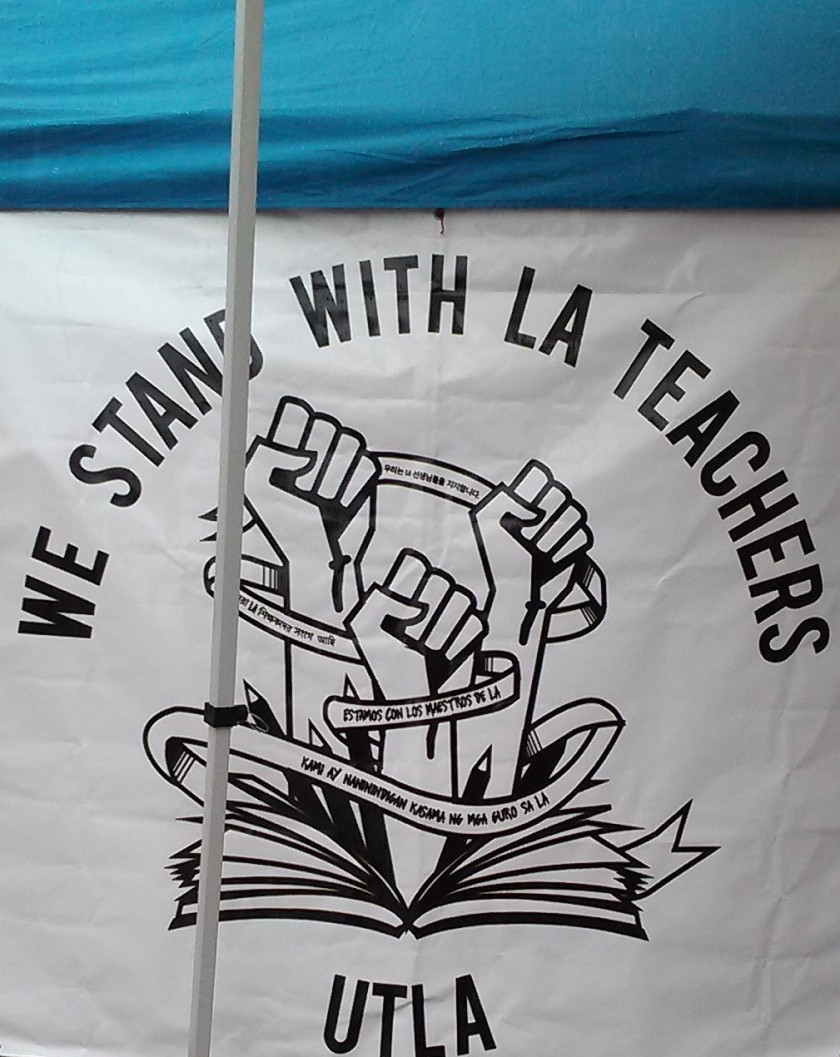 This is the first essay in a series that we are republishing and/or hosting on the recent United Teachers of Los Angeles (UTLA) strike. Originally published on New Politics

In January 2019, a massive strike of over 30,000 public school teachers stunned the Los Angeles power structure when it received massive, almost unanimous public support, especially in the city’s large Latinx and Black communities.  Latinx students now make up 75% of the city’s over 600,000 public school students. Even the anti-labor Los Angeles Times, which had issued dire warnings ahead of the strike, felt compelled to run a front-page headline on the third day that began with the words, “L.A. Teachers Bask in support for strike.”

This support, and the sustained pickets and rallies of teachers, students, parents, and other community members, forced the school board of the LA Unified School District (LAUSD) to concede considerable ground.  Everywhere, the union placards of the United Teachers of Los Angeles (UTLA) were printed in both Spanish and English. The mass outpouring in favor of the strike also helped change the national conversation about the privatized charter schools that are eating away at public education. And just as the West Virginia, Oklahoma, and Arizona teachers’ strikes of 2018 paved the way for this one in LA, so the LA strike is very likely to be followed by major teacher strikes in Oakland, Denver, and other cities.

What Teachers and Students Are Facing

Public schools are underfunded, overcrowded, lack adequate social services and are subject to the worst impulses of neoliberalism. These attacks on public education disproportionately affect poor students, students of color, immigrant children, students whose primary language is not English, and those with disabilities. For months and years, LA teachers have been demanding a modest wage increase along with lower class size, accountability for charter schools, more support staff (nurses, counselors, librarians, etc.), less standardized testing, re-investment in education programs, and a stop to random searches and policing of students. A previous strike in 1989 demonstrated how demanding only a wage increase was short-sighted. LAUSD did meet teachers’ demands in ’89 but also increased class size, cut down on support staff and programs, and heavily charterized the district.

By 2014, a slate backed by progressive caucuses brought a new leadership to the UTLA. Moreover, the reinvigorated union lost hardly any members despite the reactionary Supreme Court decision making it harder for public sector unions to maintain their membership by making it “voluntary” even for workplaces with union contracts.

As a result of the January 2019 strike, the teachers won something on all of these issues, although in some cases only marginally. The seven-day strike commenced on Monday, January 14, Teachers wore #redfored, in/with the spirit of their fellow teachers in West Virginia, Kentucky, and Arizona who had engaged in similar labor struggles in 2018. Teachers would report to their respective school site at 6.30 am and picket heavily during school drop-off. A daily rally was held in downtown LA at the LAUSD headquarters. After the rally, teachers would return to their schools to picket at the end of school. Other actions involved protesting at the homes of school superintendent Austin Beutner and Monica Garcia (one of the more obstinate board members). Beutner the new superintendent is an investment banker with no teaching or education administration background. He was also a deputy mayor under Antonio Villaraigosa and has ties to billionaire Eli Broad.

Supporters from many political leanings joined teachers on the picket lines. In particular, the Democratic Socialists of America (DSA)-LA, the International Socialist Organization (ISO), and Black Rose/Rosa Negra (BRRN) were among the leftist groups that were conspicuously in solidarity with teachers picketing and offering resources, while several from the International Marxist-Humanist Organization (IMHO) participated as individuals. Teachers also coordinated their strike activity with other labor actions across the city.