By Ali Kiani, for the Coalition for Peace, Revolution, and Social Justice

President Trump has ordered a quick withdrawal of US forces from Syria. The Wall Street Journal comments, “In Shift, Trump Orders U.S. Troops Out of Syria.” This is in conflict with the State Department and Pentagon, because it marks an abrupt shift of the U.S.’s posture in the Middle East regarding ending a four-year so-called campaign against the Islamic State in favor of Turkey, resulting in James Mattis departing as Defense Secretary over Trump’s order to pull out of Syria. In a letter to Trump, Mattis said the president has the right to a Defense Secretary ‘whose views are better aligned with yours.’ A day after Trump’s pull-out order, Jim Mattis announced that he would resign at the end of February.

According to the Wall Street Journal, the withdrawal will be from the northeastern region of the country where Kurdish militants are strong, leaving them open to attack by Turkey. But according to The New York Times, unnamed official sources believe a “full withdrawal” is imminent. The “anti-war leader and human rights promoter” Russian President Vladimir Putin on Thursday praised President Trump’s surprise decision to pull out of Syria, even as the United States’ closest allies criticized the move and said they would remain in the war-ridden country due to the threat still posed by Islamic State. CodePink also applauded the prospect of all U.S. troops leaving Syria. Trump proclaimed victory over ISIS, saying: “And we’ve won against ISIS. We’ve beaten them, and we’ve beaten them badly. And now it’s time for our troops to come back home.” The French government also disagreed with the White House’s assessment that the fight against the Islamic State is over. France’s Defense Minister Florence Parly said, “Islamic State has not been wiped from the map nor have its roots. The last pockets of this terrorist organization must be defeated militarily once and for all.”

The United Kingdom expressed a similar view, releasing a statement reiterating that it will continue its actions in Syria, claiming that the Islamic State still poses a threat even if it no longer controls much territory. German Foreign Minister Heiko Maas seconded this view, tweeting a statement saying the 1,200 personnel German personnel in Syria will remain.

The Turkish Defense Minister has declared that Syrian Kurdish militants will be “buried in ditches when the time comes.” This means that Turkey will likely attack Syrian Kurds, an outcome that was likely negotiated with Erdogan, who days ago announced a new offensive against the remaining SDF-controlled region of Syria. Turkey perceives the US-backed YPG as a security threat in northern Syria, and Ankara’s upcoming military operation is aimed against the group.

President Recep Tayyip Erdogan asked US forces to clear the contentious Manbij town of YPG forces so as to avert any direct confrontation with Washington. The upcoming operation aims to target the YPG-controlled areas east of the Euphrates River in northeastern Syria. The YPG recruits most of its cadres from the Kurdish-populated areas of northern Syria, which neighbours Turkey’s predominantly Kurdish-populated southeastern region.

Soon after the Assad regime withdrew from northern Syria during the civil war, the YPG moved in, creating ‘cantons,’ or autonomous areas, in the region in 2012. Turkey has repeatedly said that the country will not allow a PKK-imposed Kurdish corridor ranging from northern Iraq to the Mediterranean Sea.

The Turkish and Iranian presidents just met to discuss “regional stability.” Turkey is ‘intensely’ preparing for a new operation east of Euphrates.

by Javier Sethness, for the Coalition for Peace, Revolution, and Social Justice (CPRSJ) 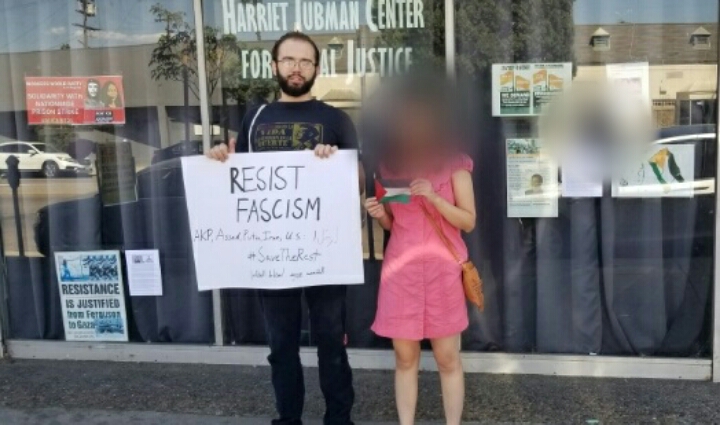 First of all, it is extremely unlikely that Harriet Tubman, the abolitionist leader of the Underground Railroad and anti-Confederate fighter during the U.S. Civil War, would ever countenance a “forum” uncritical of a fascist dictatorship engaged in a genocidal counter-revolution taking place anywhere bearing her name!

The International Action Center’s (IAC) announcement for an event that took place on Saturday, September 22nd, declares its opposition to the supposed U.S. war “against the people of Syria!” Certainly, the more than 15,000 airstrikes launched by the U.S. since 2014, mostly against supposed Islamic State targets, have involved many atrocities, including the destruction of Raqqa. Yet the announcement is silent about the origins of the Syrian uprising as class struggle against despotism and the clear counter-insurgent war waged by Bashar al-Assad alongside his reactionary allies: Putin’s Russia, the Islamic Republic of Iran, Lebanese Hezbollah, Liwa Fatemiyoun from Afghanistan, and other affiliated paramilitary groups from Iraq, Lebanon, Afghanistan, and Pakistan.

Instead, the announcement parrots pro-Putin and pro-Assad propaganda, claiming that the regime is about to “liberate” Idlib from “Western-backed terrorist groups.” Such framing silences the estimated 100,000 detainees who have been killed by torture in Assad’s prisons since 2011, and seeks to downplay the horror that the conquest of Idlib would entail, echoing the fate of Darayya, Homs, Eastern Aleppo, Ghouta, and Der’aa. Besides, the rebel groups in Idlib are closer to Turkey than the West. To claim these to be “contra armies,” as the IAC does, is to present an extremely misleading and false equivalence between the Sandinista Revolution and the Assad Regime.